Maple Grove Cemetery offers many options to honor your loved ones

We all wish we could avoid having to arrange a loved one’s funeral -- confronting one of life’s inevitable challenges is never easy.  At Maple Grove Cemetery we do our best to make it less daunting.  Our staff provides a compassionate and caring environment for  bereaved families.  They are knowledgeable, will answer your questions patiently and will assist you in making an unhurried decision about interment arrangements.  If you prefer to understand the options beforehand, you can get started here by learning more about each of the services we provide.  Several factors will determine the best interment option:  the wishes of your loved one, convenience for remaining family members and overall cost.

Interment
Maple Grove offers many options for interment in unique settings, above and below ground:

Memorializations
To remember your loved one in a special way, Maple Grove offers bronze markers, benches,
trees as well as memorial granite blocks at The Center as memorialization options. 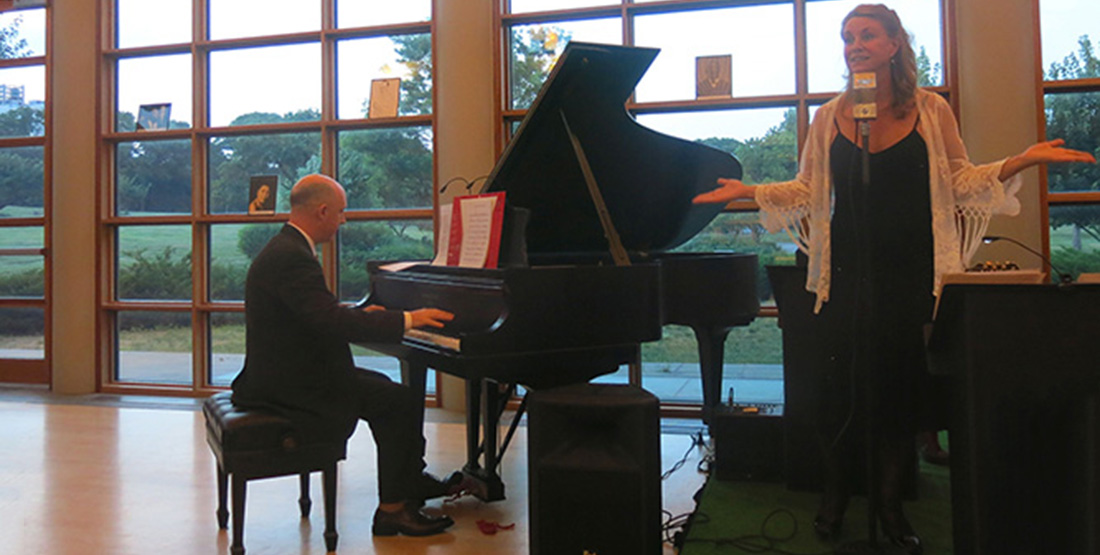 The Center at Maple Grove is a place of reverence and respect – a place where families may gather for remembrance, inspiration and the celebration of life of your loved one. 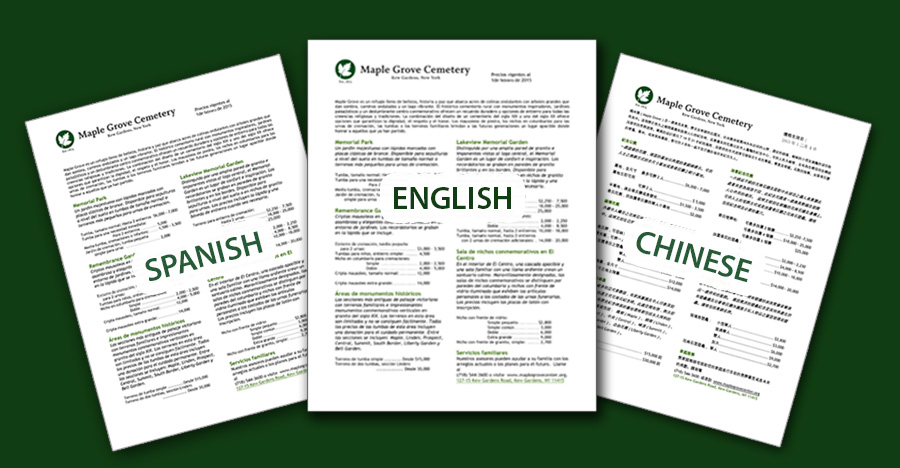 Price Lists
Burial options, memorialization charges, interment fees and office charges are subject to change.  For your convenience please see the current pricing in the language of your choosing. If family members are currently interred at Maple Grove and you require additional burial space, please contact us to make arrangements.
rules
Rules and Regulations

We welcome visitors to Maple Grove, either for visiting family and friends interred here or to attend one of our cultural or historical events.  Visitors are reminded that in addition to being a historical site and event venue, these grounds are sacredly devoted to the interment of the dead, and that a strict observance of the decorum which should characterize such a place will be required of all. Additionally, we offer this list of rules and regulations as a guide to those choosing Maple Grove Cemetery as a final resting place for loved ones.  RULES →

To ensure that Maple Grove Cemetery is a place you'll be proud to select for your loved one and a place you'll enjoy visiting, we provide ongoing maintenance of 65 acres of cemetery grounds and facilities.  We take our stewardship very seriously and do major landscaping, renovations and repairs throughout the year to keep Maple Grove being a historical treasure trove, a horticultural masterpiece and an invaluable community resource.

GLOSSARY:  FUNERAL & CREMATION TERMS
Alternative Container: An unfinished wood box or other non-metal receptacle without ornamentation, often made of fiberboard, pressed wood or composition materials, and generally lower in cost than caskets.
Casket/Coffin: A box or chest for burying remains.
Cemetery Property: A grave, crypt or niche.
Cemetery Services: Opening and closing graves, crypts or niches; setting grave liners and vaults; setting markers; and long-term maintenance of cemetery grounds and facilities.
Columbarium: A structure with niches (small spaces) for placing cremated remains in urns or other approved containers. It may be outdoors or part of a mausoleum.
Cremation: Exposing remains and the container encasing them to extreme heat and flame and processing the resulting bone fragments to a uniform size and consistency.
Crypt: A space in a mausoleum or other building to hold cremated or whole remains.
Disposition: The placement of cremated or whole remains in their final resting place.
Entombment: Burial in a mausoleum.
Funeral Ceremony: A service commemorating the deceased, with the body present.
Funeral Services: Services provided by a funeral director and staff, which may include consulting with the family on funeral planning; transportation, shelter, refrigeration and embalming of remains; preparing and filing notices; obtaining authorizations and permits; and coordinating with the cemetery, crematory or other third parties.
Grave: A space in the ground in a cemetery for the burial of remains.
Grave Liner: cover that fits over a casket in a grave. Some liners cover tops and sides of the casket. Others, referred to as vaults, completely enclose the casket. Grave liners minimize ground settling.
Graveside Service: A service to commemorate the deceased held at the cemetery before burial.
Interment: Burial in the ground, inurnment or entombment.
Inurnment: The placing of cremated remains in an urn.
Mausoleum: A building in which remains are buried or entombed.
Memorial Service: A ceremony commemorating the deceased, without the body present.
Niche: A space in a columbarium, mausoleum or niche wall to hold an urn.
Urn: A container to hold cremated remains. It can be placed in a columbarium or mausoleum, or buried in the ground.
Vault: A grave liner that completely encloses a casket.
PRE-NEED PROGRAM

Pre-planning a funeral is a type of insurance that safeguards families and loved ones from burden and expense.  Options like full body burial for current clientele, burial and inurnment for cremated remains and memorialization arrangements offer you the opportunity to openly discuss your own wishes and those of your loved ones. Together you can make informed decisions that will be meaningful to you and your family and will offer peace of mind to your loved ones later.

The staff at Maple Grove Cemetery understands what it means to be considering burial and memorialization. They will explain the options and carefully guide you through the process.  Please call us to assist with your decisions and help you plan practically and wisely.

Many find it useful to record important information that will be of help to  family in carrying out your wishes. Be sure to tell them where it is kept.

PRINT PERSONAL DIARY
GUIDE TO ARRANGING
A FUNERAL
When planning a funeral you have many decisions to make. You may feel overwhelmed or confused. Read this guide by the NYS Dept of Health to learn more before you make any  decisions.
CLICK ON IMAGE